I had some friends in a band who were going to play for my art show. The morning of the show, they canceled. I felt obligated to get a replacement, as the restaurant owner had been touting all week that my opening would have a musical act. I asked friends left and right if they could help me find a replacement on the day. Part of me knew it would be fine if I didn’t have anyone to play, but gee, it wasn’t going to be nearly as fun, so I wasn’t going to give up. I tried to remain stress-free and calm, trusting that the universe would provide.

I spoke of my search to the waitress at the restaurant where my art was on display. The owner wasn’t in yet so I couldn’t tell her the bad news. The young woman there said she knew quite a few bands. I gave her my number, and sure enough, a couple of hours later she called saying she would forward me on to a woman named Sabrina, who was helping coordinate the gig for a band she knew. 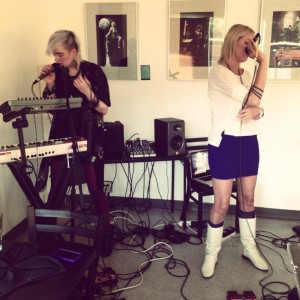 Sabrina and her friends were dolls. Not only did I book her friends’ band Drala for the night, but I got a second referral for a lovely gentleman named Jonathan Brinkley. They were all fabulous, though their music was incredibly different (Drala is sometimes described as “electronic ghost music” and Jonathan is an acoustic vocalist). Each of them was kind and supportive to my project in their own way, and I very much enjoyed their music and getting to know them all.

I chatted with Sabrina when the show was all done, and she really resonated with my project. She invited me to be on a radio show she helped with on KBOO that Monday. I admit I was a little surprised when she followed up the next day and confirmed I’d be on there! Had I not had a band cancel their gig, I wouldn’t have had that opportunity. Talk about making lemonade from lemons. (Before I got on the show I had a lovely brainstorm session with Sabrina and Chelsea Uniqorn of Drala. Those ladies are fab.)

My appearance was very short on the show, I mostly just got the chance to describe my project and put out the URL a couple of times (I’m pretty sure I got one backer out of the appearance!), but the fun thing is that it all led to yet another opportunity. I met Anne and Dennis, who were helping to coordinate the Harry Smith Seance event this Thursday. Anne told me that Harry Smith was big into Tarot, being a huge collector of decks, and having created one of his own. They were both on the show before me, and Anne invited me to have a table at their event after it was all over, since it fit so well with the theme.

All goes to show, dear readers, that you never know where an “oh no” is going to lead to an “oh yes”. This little domino effect of serendipity just seems to go and go, because the art show only happened in the first place because the guy who was in charge of arranging the art for the restaurant, Drew, saw me loading up my car with art for the salon I did in late April, and liked my work enough from that quick sampling to invite me to hang my art for the month they had free in the restaurant, once I had all my art back from the salon showing.

We can never know exactly what a small, planted seed will grow into. I can firmly attest to the fact that the only reason things have gotten so far is because I have learned to be bold in speaking about my passion and joy in working on this. It always leads to something remarkable, usually in a funny and surprising chain reaction kind of way. And it helps to trust that when things seem to be going wrong, they very well may be going very, very right. That’s what I remember when it seems we have a long haul to go on this Kickstarter. I have no clue what magic will happen just because I showed up.
If the only other thing I get out of this is the fun of the adventure, I do hope that it proves an inspiration for others to simply show up and show their passion, too.