…and is on an Epic Mission of Intuition 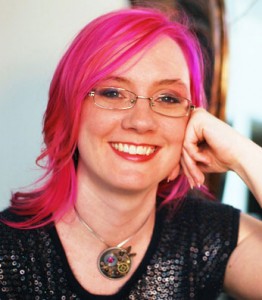 In Portland, Oregon, we have a saying: “Keep Portland Weird”. I have been bringing the vibe since I stepped into town in 2002, traveling from the distant lands of Hattiesburg, Mississippi to make my mark on the West Coast.

I never fit in back home. It’s not just my trademark pink hair (a quality for which I have become so well-known that people actually complain when the color fades back to blonde). I’ve been determined my whole life to march to the beat of my own drum. Now I love marching to the beat of the Portland-famed March 4th Marching Band, one of the many delightful examples of how misfits and artists like myself find a glorious stage in the fair city of bridges.

I’ve always had a feeling the world was bigger than our most apparent five senses could capture, and Portland is the first place where I really found my way with my sixth sense. Like many starting down the intuitive path, I met resistance from the outside world and my own healthy skepticism. But I’ve become well known for being a person for which magic and synchronicity are reappearing elements. And, as an artist and writer, I am no stranger to the power of symbols and metaphors.

Like many creative types, I’ve had a tumultuous life journey. I had an incredible relationship with my mother when I was young, a woman who I know in retrospect was a powerfully intuitive woman. But she didn’t seem to have the same coping mechanisms I did (nor the same unyielding support I had from her as a child), so she eventually gave in to the lure of alcohol to handle the overwhelm her gifts brought her.

She eventually died from alcohol poisoning, and I lost my closest friend. I knew about her death the day after it happened, even though the mailman only found her body two weeks later (she had left the door ajar), because of a dream where I saw her spirit leaving her body as she laid on the couch (where the mailman had found her). I remember waking up from that dream with a start, and knowing with certainty that, if she wasn’t gone already, she would be very soon. 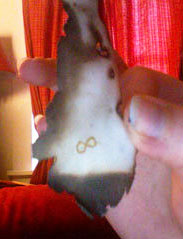 Years later, a friend encouraged me to write her a letter of healing and forgiveness, and to burn it as a way of sending the message into the astral. In the backyard I lit match after match, re-lighting the stubborn envelope until only a small slip of paper remained. When I turned it over, it bore the perfect mark of an infinity symbol, my mother’s reminder to me that we will always be connected.

I kept that slip of paper, to remind me that magic can manifest in this physical world in symbols and feelings. 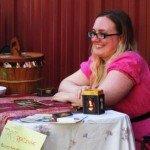 This was one of many amazing events that led to my learning to trust my connection with the divine. Eventually I began studying different forms of divination, settling for awhile on Brian Froud’s beautiful Fairy Oracle, but ending up on the rich world of Tarot. (One of my favorite decks is The Golden Tarot, with its lush imagery and digitally-collaged style. Definitely an inspiration to me!)

I have for years wanted to make my own Tarot deck, with ideas for styles, imagery, and specific card slants that could meet the needs I had begun to crave in a deck for myself. I held back for awhile, because creating 78 (or 79) pieces of art is quite a task! 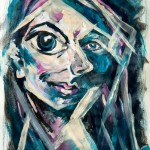 Still, big undertakings are sort of my forte. I’ve written three novels, managed a major community site for several years, taken on a number of film and art projects over the years (like 48 Hour Film Project and something I called 30-in-30, creating 30 self portraits in 30 days), not to mention managing a successful design and development business for nearly seven years, which is going strong to this day. 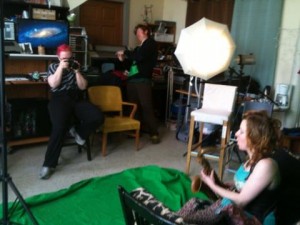 Since I started this project I’ve felt as if I have simply been a steward to bring it into the world. Sure, it’s my art and is imbued with my style, but I can say with sincerity that it’s the Universe that has sustained me in my creation thus far… Mostly through the kindness and creative collaboration of other people who have helped along the way. In 2013 I completed my first Major Arcana version of the deck, which has now expanded into a 3rd edition, with a reading guide and retail packaging to boot.

Whenever I feel stuck, something miraculously appears to get the wheels going again. A perfect visual hits me, I see an image to inspire things along a new direction, or someone steps in and offers up something from their own soul that adds a new richness and life to piece I am creating. It’s all a dance, and through the entire process I have sensed the presence of the infinite, the magical, and the forever loving. 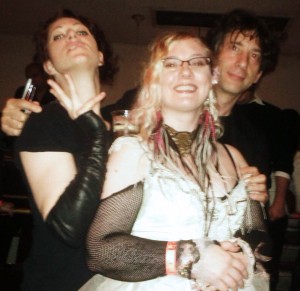 I am constantly fueled by the world around me. The music of David Bowie or Amanda Palmer. The writings of Neil Gaiman. The art of Dave McKean. The wily shenanigans of Doctor Who. The incredible fashions of Lady Detective, Miss Phryne Fisher. 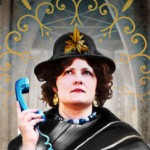 But my ultimate muse for this project comes in the form of a very dear and close friend. If it weren’t for Cynthia Lopez (the subject of The Chariot card), I would not have gone down the path of creating a Portland Tarot, a deck that captures the spirit and heart of the city I love so well. Maybe not everyone knows what Portland is about, and that’s perfectly alright… Because the ideals of Portland are what the deck is really about. A belief in magic, and support, and the infinite wisdom of our own unique souls. Our own intuition is a voice we can listen to, and if we get still and quiet, simple, rich images can communicate the information we need to thrive.

I hope you will join me on this incredible journey. Subscribe to my newsletter below to receive updates about the project, and be the first to know about developments on the deck itself!

“I’ve known Theresa and marveled at her artistic talents for years. But in this last year, I’ve seen her passion, creativity, art and focus laser in on the most exciting project ever! She is pairing her passion and expertise in Tarot with her art and the initial cards are nothing less than gobsmackingly awe-inspiring. Theresa is re-envisioning and re-creating every single card in the deck, and every single one of them is deliciously Portland.

“I was honored, though initially a little self-conscious to be one of her models for this, but I confess that she brought out my best and the photo shoot was a blast. Then what she created out of that, such a detailed, inspired, creative rendition of strength – which she captured in the most soft and feminine way, and enhanced with Portland’s man-made and natural symbols of strength. And she keeps doing this – card after card! All of this, combined at dizzying levels of passion and focused purpose is what leaves me gobsmacked and completely excited! I am 110% behind her, and I know I am one of many. Go Theresa, GO!”