It’s time to take an honest accounting of the situation at hand, but be sure to keep compassion in the mix; not everything in life is a simple matter of black and white—there are shades of gray present in the workings of karma.

A weighing is taking place, and it might just be you weighing yourself against your own expectations or faulty perceptions. Understand yourself and how the world mirrors back your own beliefs and then do some appropriate accounting and adjustment. Self-knowledge can be a challenge, but to know thyself is not enough; you must be willing to move on from past dysfunction and blame in order for positive changes to truly take hold.

While Justice is often a card associated with the legal system, in my own experience it comes up as more often as a card that speaks up for honest self-accounting. We can be afraid to account for ourselves—good or bad, wrong or right—because we fear facing our own potential “ugliness” (notice that it’s only the potential of it!). Yet, this isn’t a card about judgment, but of justice: true Justice, the cosmic kind, is about a karmic balance. In this sort of righting of the scales, making things right is not necessarily helped by blame and retribution. And sometimes holding onto a story gets in the way of telling the real truth. 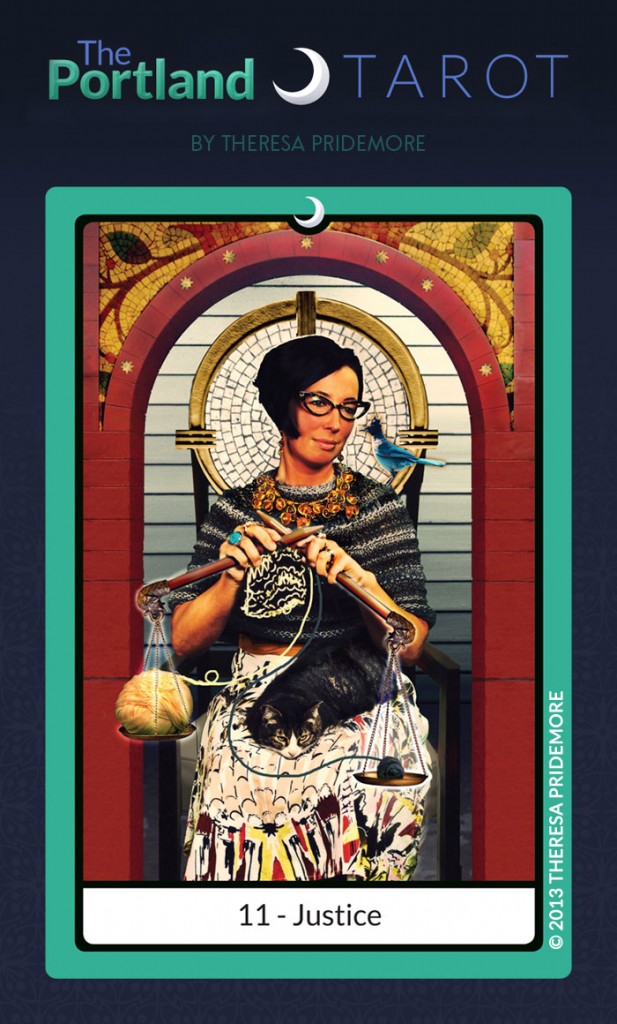 I had intended to invite this model to be in a card for awhile, and I kept coming to the Justice card, though I couldn’t figure out why… I laughed when I realized how perfect it was to have her, since her name is Marie Ballance! What more perfect a name for a lady holding the scales than that? None, I think. But she’s also perfect in many other ways, the primary one being that I believe she carried such a wonderful energy for the Portland Tarot take on this card, and really helped to shape it into what it ultimately became.

I created this card in the midst of a whirlwind few weeks around my Kickstarter campaign of spring 2013, and I was coming right up on the photo shoot for Marie, but still did not have a firm concept in place. I was struggling with how to find a Marie connection, a Portland connection, and a Justice tie in for the visuals. Yet, I had learned up until that point that trusting in the process and creative flow that was in my life at the time would reap the best rewards. I wasn’t disappointed: when I lay down to sleep two nights before the shoot, it came to me.

Marie is an avid knitter, and I saw an image in my mind of her holding the needles up with the scales hanging from them! I giggled until I fell asleep, and eagerly wrote her the next day to plan out our costumes and other elements.

Even before the shoot, Marie and I had some really interesting chats about the Justice card. I was so delighted by all the thought she put into this card in advance, and her unique take on the card that ultimately inspired some of the imagery.

Because I just love what she had to say, I’m going to include some of it here!

“Justice is highly intuitive. We do not live in a black and white world, so judgments or decisions have to be weighed carefully; what may be the right course of action for one person may not be for another. We could say that life’s decisions are on a spectrum; there are many options in-between – many shades of gray in a world of black and white.

“Justice is also reassuring. The knowledge that we can learn from our present circumstances in order to change our future is empowering.

“Justice listens. Some say that “Justice is blind” – what that really means is that justice has to listen and truly hear people in order to understand the truth and then dispense judgment. Her listening skills must be finely attuned because she cannot rely on eyesight to help make decisions. That, too, means that Justice looks at the inner person and inner truth.

“Justice wants people to thrive – she knows that striving to be in balance brings a peace and harmony into all aspects of a person’s life.

“I think that Justice embodies love. She is able to look at people and at a situation with understanding and compassion as well as with a no-nonsense, take-responsibility-for-your-choices attitude and perspective. By allowing people to see how their decisions are connected and yet allowing people to make their own choices, Justice demonstrates that she wants people to learn their own lessons and forge their own path, and that freedom is one true expression of love.”

How awesome is that?

You can probably see now how her words influenced the images. The scales each have a skein of yarn, and the smaller ball weighs more than the larger one to illustrate that not everything adds up the way you think it will. The cat (her adorable friend Bunny) looks at the viewer knowingly, as an all-seeing witness. The bird is her messenger, bringing back the news of the world at large; bluejays also stand for the right use of personal power.

Funnily enough, when Marie saw the final piece she laughed because she had been running into blue jays during the two weeks prior to the unveiling… and we hadn’t even discussed my decision to put a blue jay in there prior! At that point I had ceased to be surprised to magical happenings like that, though. They seemed to happen all the time, and I just loved adding that one to the mix.

I took a saintly slant to this image as a way of suggesting the softness Marie describes in Justice. But I also think it is a great illustration of her own kind-hearted and helpful nature. She is an incredible nurturer and an inspiring figure, something I felt deserved an honorific sort of presentation.

Instead of a harsh dispenser of Justice, I felt Justice should be gentle enough to help us look within, and to fall in love with the truth more than our own stories.

Previous Day – The Wheel of Fortune Next Day – The Hanged Woman