Meet “The Wheel of Fortune” Card

Sometimes you’re up, sometimes you’re down… Remember to hold compassion for yourself wherever you are and try to stay in the center of the wheel. And don’t forget:  even this world is an illusion.

If you are seeing the possibility of an improved fortune through this card, don’t let it go to your head! Appreciate the good times and remember that things can always change. It’s your attitude about life that is the biggest key to your continued contentment. And don’t forget that your shadow side has its place in life; at times we must experience difficulty to assist in bringing our shadows into the light, and thus becoming closer to true enlightenment.

There are times in this deck that I felt compelled to take a modern spin on a traditional Tarot image, and other times where a very different image from the norm came to me. The Wheel of Fortune is such a card; I just seemed to “download” it one day while meditating on the meaning of this card, and ways to take a more Portland spin on it. 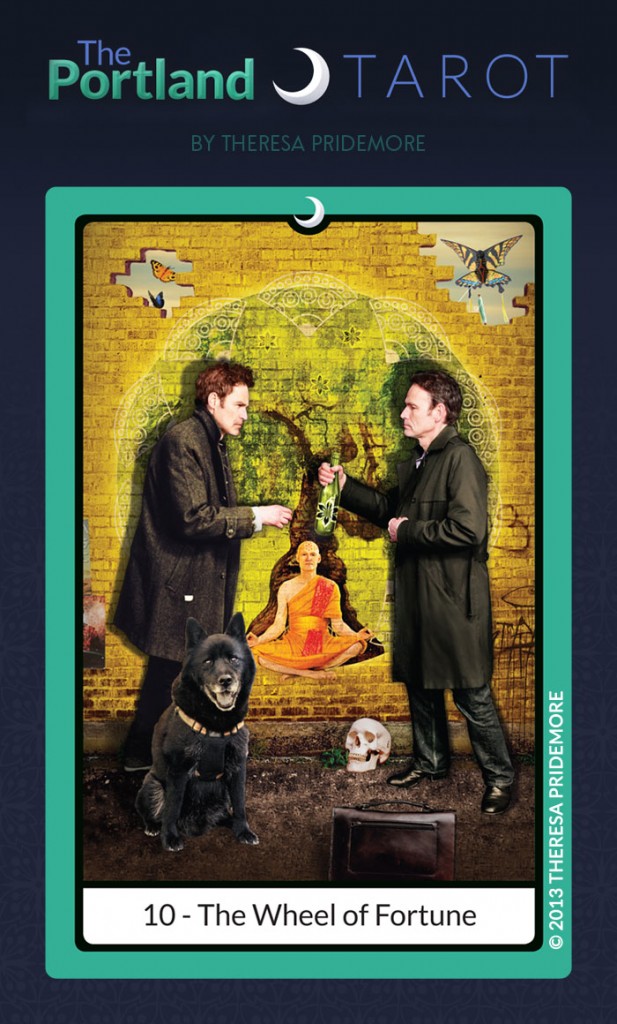 Bill Wadhams is a great friend and a wonderful guy. He’s had an incredible array of life experiences: he’s best known to the world as a singer in the band Animotion, which became popular for the hit song “Obsession” in the 80s. They still do big shows and tour, and when he’s not touring with the band he’s acting in plays and musicals with the Portland Artists Repertory Theatre, writing his own music in his home studio, and even building web sites. He’s a multi-faceted and talented person and has navigated many ups and downs in his own life, and for this reason I invited him to be the star of this card, as I knew he would really get what I was going for.

My concept required a certain amount of acting and collaboration on concept, and he really brought a wonderful energy and level of experience to the shoot.

For this card I had an image in mind of a person experiencing himself at different stations in life. The story is like this: a man hits hard times, perhaps even times he thinks he might never recover from. One day in the future, he’s found his way forward… He’s well-to-do, successful, and has put this past behind him. Somehow they meet, in a strange break in time and space. Or maybe just in his own mind; he could be remembering himself in more difficult days by encountering a lost soul who is experiencing a similar hardship as he once did. The key to healing this “up and down” cycle and finding peace within himself is an act of compassion toward this past self; it’s the moment he realizes that he was doing the best he could with the knowledge he had at the time, and that there should be no shame or blame in accepting the past. There’s also a recognition that things could change in a heartbeat, and he could also be “down and out”. So, instead of judgment, he offers a libation (a bottle of beer or wine), as an acknowledgment that we all hit times where we have a deep pain that needs not only a bit of soothing, but may also crave a real connection and acceptance from other humans (or ourselves) to heal ourselves and move through our challenges with grace.

When his younger self faces him, they are eye to eye and equals, despite their different stations.

Of course, this story could also be reversed, as the wheel goes both ways… He could be well-to-do and still fall on hard times. However the wheel spins, understanding and compassion for all the stages of life are key.

Behind the two versions of the man is a the mural of the tree of life, with a monk version of him sitting in meditation at the base. This represents the enlightened self, a connection to the part of the self that exists beyond the physical realm and can hold space for neutrality and true contentment, outside of all experience. It is the place beyond suffering, a place of complete acceptance to all that is.

The wall is crumbling in places, revealing yet another world behind its cover. It reminds us that even this reality is an illusion. We may not feel like the unfettered butterflies on the left side of the image, but in the meantime we can “fake it til we make it”. The sky beyond the wall nods to a deeper level of understanding beyond this veil, a greater dance with karma and soul growth that goes beyond this life. Our truest self is that butterfly, but right now all we can do is be a kite, dancing through life in honor of our true butterfly selves. And because we are here to play in this world, there is no need for us to be butterflies anyhow, otherwise we wouldn’t have a need to be in this three dimensional world at all.

The skull points to the temporary nature of this life and our story. The dog represents our shadow, and he looks at the viewer directly here, saying that if we can acknowledge our shadow we can more quickly move to peace.

If you get this card in a reading, it may be a call to remove yourself emotionally from the dramas in your life, or to reflect on the cycle of life and remember just how temporary everything is. I often find myself recalling a quote from Hamlet when I look at this card: “… there is nothing either good or bad, but thinking makes it so.” Of course, unlike Hamlet, we can choose to see a playground of learning in life, instead of the prison of a nutshell he views his own world to be.

I’m thrilled to have Bill’s awesome acting talent, costume play, and conceptual contributions within this card, and for his being willing to be “a player who strut and fret his hour on the stage” of The Portland Tarot.

Locations/Landmarks: None… Just the Portland love of beer and wine!