Get ready to bring your big ideas down from the astral and make them real. Now is the time to envision and act. You have great power at your fingertips—the power to manifest the things you see in your dreams. Using the compass of your emotions and the fire of your will, set your sights on a focused purpose and give shape to the world!

The Magician is a card about focused will, magic, and manifestation. To me it is an archetype for someone who controls an incredible flow between mind and matter. The mind fetches information from the realm of infinite possibilities and sees ways to make it concrete. Maybe this is a combo of skill and creativity, or maybe it is the sheer ability to will things into being… Either way, the Magician is a power to be reckoned with. 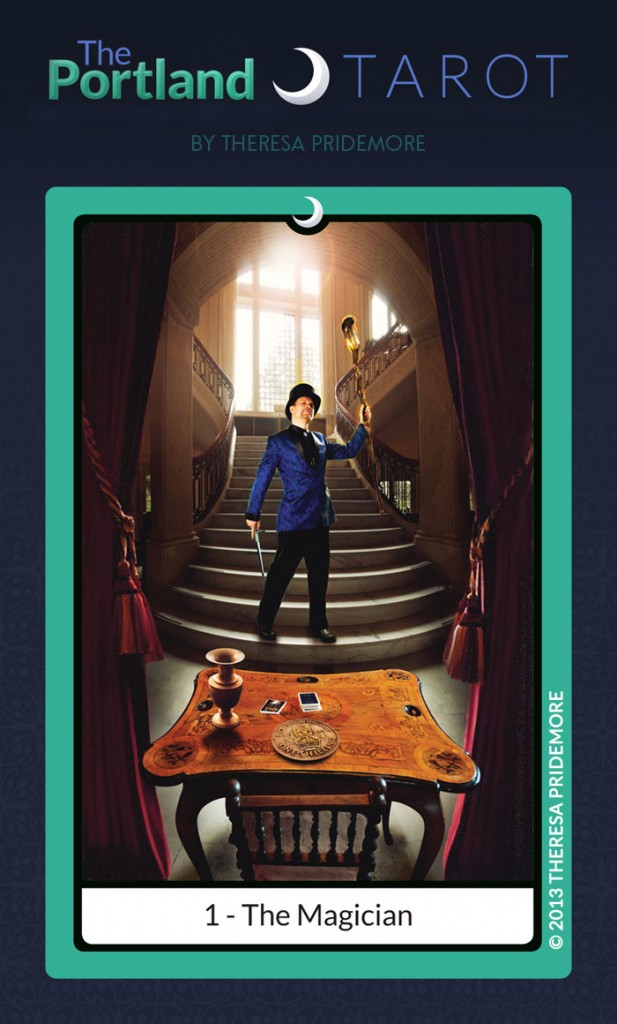 When I announced the launch of my Tarot deck project, Lee was the first to request placement on a card—specifically that of the Magician. Originally I had chosen this card for myself, but when Lee requested it, it felt so right that I had no choice—in my own mind—but to step aside and give the title to him. Perhaps that’s just how powerful of a Magician he is. 😉

Lee is an incredible artist and professional illustrator. He’s done covers for well-published fantasy and science fiction authors, beautiful posters for plays and musicals, and has even illustrated an image of one of my most admired musical artists, Amanda Palmer, for a non-profit literary pin up calendar that he created himself (which he now has established as a yearly project. This year funds will go to benefit the Clarion Writer’s Workshop).

To list these very few accomplishments feels only like a drop in the pond of Lee’s massive visual storehouse. There are few artists that work as hard as Lee, and his mastery isn’t an accident; he’s put in his 10,000 hours, probably times 10.

And yet, with all this strength of will, there is a delightful magic that surrounds Lee. He is gentle and bubbly, giving and supportive, and well-known in the circles he walks. You’d think all that focused creation time would have rendered him a hermit, but somehow he even manages to have a robust social life with a huge a tribe of good friends, in the midst of it all.

Only a Magician could pull it off.

Lee’s stunning look in this card is in part thanks to this lovely blue jacket he had acquired on a trip in New Zealand that he took with his sweetie this year.

With the right duds and this pose in mind, I had to find the perfect location to match the energy that Lee brought to the shoot. When I discovered the beautiful stairwell in the foyer of the Pittock Mansion, it was decided. I just loved the double-helix effect it created and how the light from the window wrapped around him. With his staff held high, the Magician most definitely felt like he was grabbing light from the sky and translating it into color and form… just like a gifted artist would.

When I started this project and received such glowing encouragement from Lee—someone who I really respected as an illustrator—I took my decision to create the deck even more seriously. (When a gifted craftsman says you are heading in the right direction, you definitely take it into consideration!) And when he offered to stand in as occasional mentor, reviewing my artwork as I went, I jumped at the opportunity.

I’ve already learned so much from him from our time together, and my work has quickly grown thanks to his insight and encouragement. (You’ll definitely see even more of his influence in the second edition of the majors deck.)

I couldn’t resist the chance to put a deck on the table, reflecting the very image Lee was starring in. Since he’s put his Magician stamp on the project, it seemed appropriate to recognition his place in the project’s manifestation in a visually tangible way.

(Maybe you now wouldn’t be surprised to learn that Lee created an inked version of a Tarot deck several years ago, in a matter of three months—just to prove a point. Yes, I’m jealous. But from a place of deep admiration.)

Like any good Magician, people watch Lee in wonder as he almost miraculously makes things happen that others may only dream of. And he does it with panache, a good sense of humor, and a big heart.

Previous Day – The Fool Next Day – The High Priestess