Maybe it’s time to take a retreat from the world to pursue more spiritual wisdom and insight. The wilderness may beckon you toward a search that is more subtle, slowly unfolding, and timeless in nature; it’s the antithesis to the hurried, forced motions of modern life. When the Hermit card appears, it is a call to evaluate your level of social interaction, as well as the connection you feel to your own inner light. If you are closing yourself off you may need to open back up to the world… But if you are keeping yourself busy and ignoring that inner voice, it may be time to find some quietude.

With the ubiquitous presence of technology, media, and online community you will likely have to evaluate how these elements affect your “hermiting”. Are you using technology to connect to others in healthy ways, is it a distraction from yourself, or a way to hide from the more challenging human-to-human interactions? Does it make you feel connected to yourself and others? And when the spirit calls for some down time and reflection, can you leave your phone at home during your “walk in the forest”?

The master camper on the mountaintop is not rushed in his quest for inner knowing. He understands that the process has its own flow. He knows that the best way to be present is to take one careful step at a time and carry a torch to light the way. Sometimes night is the best time to explore, when the inner light can shine more clearly and isn’t as drowned out by other sources of illumination. 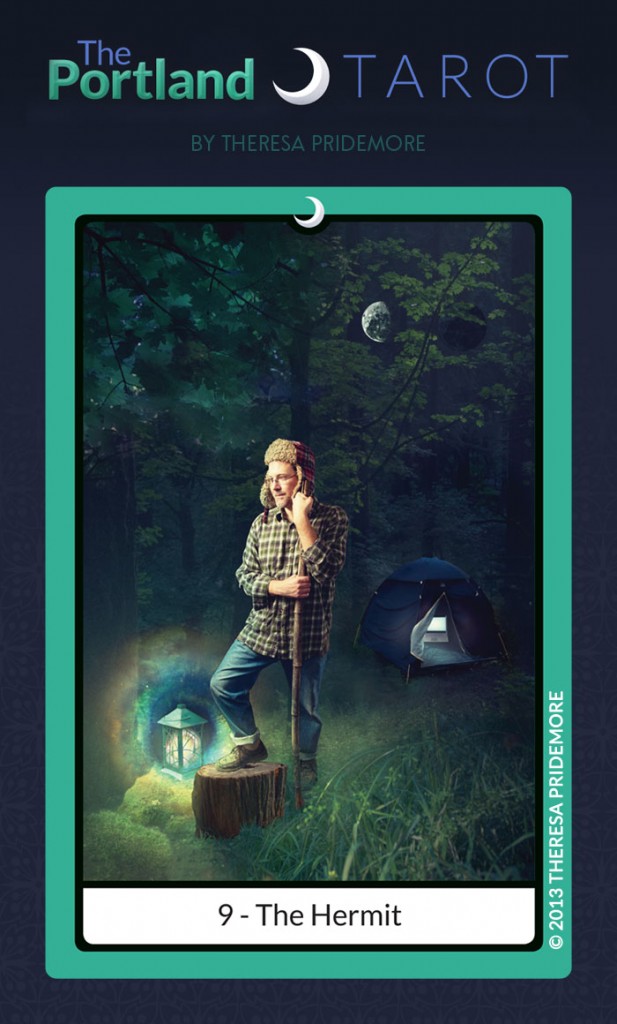 Scott Bullock is an old friend from my time back in Mississippi, and the star of this card. In fact, his discovery of Portland is the reason why I moved up here. (It’s funny just how many people from the South have made exodus to Portland, aside from the both of us.) When I embarked upon this project I knew I was going to approach him for The Hermit, because I’ve always seen him as a person who knows how to reflect his own unique light, and is truly a personality who thrives when he has his own personal cave of reflection to return to at the end of each day.

It’s been awhile since Scott and I ran in the same social circles, but back in those Mississippi days, I always felt he was the sort of person that folks loved to go to for sagely advice. He always had an element of the wise old man in him (in fact, he sometimes called himself an old man), and because he was determined to keep his own offbeat perspective (which is a huge part of his charm), people always felt safe to be vulnerable and even odd with him. In fact, I think everyone is a bit odd when you get down to it, and it takes a special person to create a safe space for eccentricity to come out and play. When you sit around the campfire with the Hermit (something he did regularly), reality feels more malleable and less bound by limitation. When we are willing to play in the enchanting shadows of the woods for awhile, our inner light becomes even more visible—like gazing upon the sky when away from the city, and being struck by the sparkly magnitude of a suddenly-visible Milky Way galaxy.

Scott also has a strong relationship with technology and gaming. His quieter nature works well within the structure of on-line communities, but it doesn’t keep him from forging deep personal bonds with friends. In fact, as long as I’ve known him he’s always had a great group of artists, writers, and creative souls around him that he’s nurtured and inspired in some way. At the end of the day, this wise “old man” Hermit is also a muse, and knows how to mingle his softer vibe with the vibe of a group of compadres.

When I look at the Hermit card I generally see a card saying it’s time to step away from the herd and listen to your inner voice, to gaze upon and come to understand your starlight. You have to channel the energy of the wise man on the summit and look to that archetype in yourself to discover your own wisdom. But resist the urge to act; when the Hermit comes up, it’s really time to just be and unfold.

However, in this day and age technology creates an added challenge… We fill our every waking moment with our phones and facebook and television, so we may think we are stepping away from society and quieting our lives, but our minds are still very busy. Even in nature. There is a temptation to immerse ourselves in our tech instead of connecting… And often the hermit card beckons us to go into nature and connect and clear our inner closet.

Because the camper in the image is walking away from a tent with a computer, it begs the question…. What is your relationship to the quiet, to interaction, to community (online and off)? If you look, you will know the answer to the question, and if it might just be time to pull your energy out of the internet and back into your own body.

Because Portland is such a camping and hiking town—with a funny, paradoxical tug from the tech sphere—and is notorious for it’s love of flannel thanks to Pendleton, I felt this would be a great way to explore this image.

I’m delighted that Scott was willing to collaborate with me on this card and take on the energy of The Hermit, and to breathe his unique personality and life into it. I think we often have a negative association with the notion of embodying hermit energy in our fast-paced world, and I appreciate his ability to play in this energy and give it such a great visual life!

Not to mention, I am super grateful to him for introducing Portland into my world. It is here that I’ve found a great social circle that also understands for the occasional need for “hermiting” and for having time alone to really commune with that inner quiet. It’s a special thing, indeed.

Locations/Landmarks: Mount Tabor (not technically a camp site, but still beautiful and serene!)

Previous Day – Strength Next Day – The Wheel of Fortune