Meet “The House of the Seeker” Card

You are on the path of the seeker; it’s time to expand your studies. Whether you do this through education, scientific exploration, or a personal unfolding of experience, you are relating your personal path and experience to the world around you—asking questions, comparing perspectives, making hypotheses, and seeking tutelage from the appropriate masters.

Be careful in your journey not to fall into the trap of dogmatism or to take the easy route of following the status quo; whether religious or scientific in nature, we can too quickly assume there is one right answer. In your study, contrasting beliefs may come to light, and do your best to use the gift of this conflict to shed light on your own inner truth. A true seeker realizes on their search just how small they are—and this opens their eyes to the massive importance of being dedicated to the greater truths, and to bringing in light through the search for understanding where there might once have been the darkness of ignorance.

Traditionally the fifth card of the Tarot, The Hierophant represents religion, tradition, and structures of learning and knowledge (in addition to the pursuit of it). In Portland, the search of knowledge and truth spans religion, spirituality, and a Carl Sagan-like wonder of science and the unfolding universe. For that reason The Hierophant felt a bit out of place in this deck, so I changed this trump to “The House of the Seeker”. Since not everyone aligns with any one specific religion, I wanted to create an overarching card that was accessible to more people. 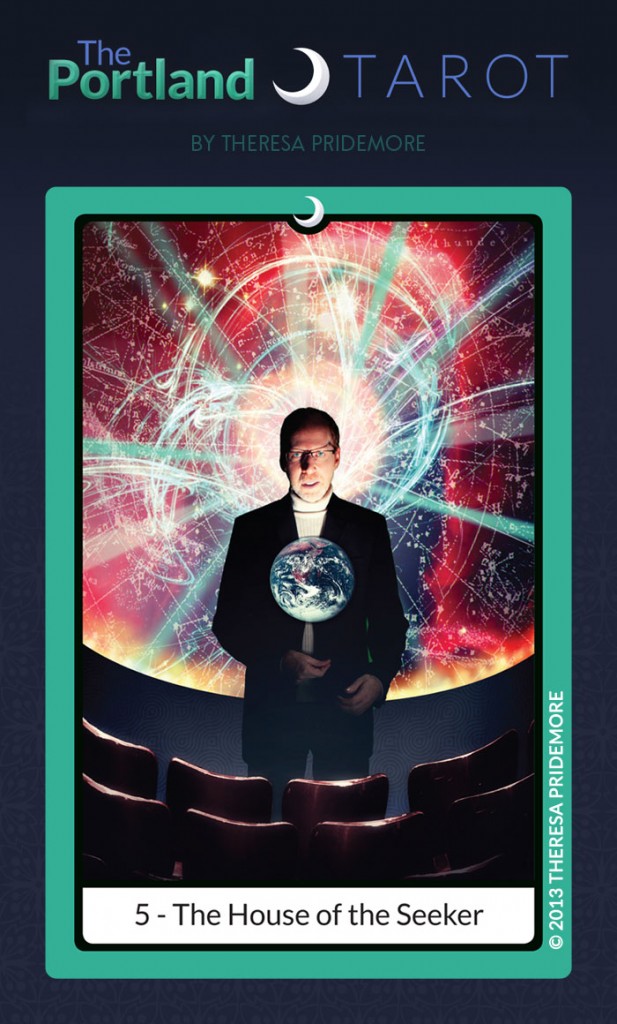 When seeking a model for this card, I wanted to find a male figure who felt connected to both spirit and science. A friend suggested Dave Markowitz, a medical intuitive and all-around nice guy. We had a great deal of fun during out photo shoot, and I enjoyed getting to know Dave and discovering our mutual love for Star Trek. I had no idea just how perfect a fit he was for the concept until I got to know him better during our collaboration.

In religion, science, or any spiritual pursuit, one can forget the importance of expansion and the quest for knowledge in the effort of preserving the dogma of obsolete labels and categorizations. This card points to the need to broaden our understanding of the universe and align with wonder and the beauty of tradition instead of simply adopting past ideas and attitudes by rote. We may need structure to help us enter into the arena of knowledge, but we also are meant to add to that arena with our personal discoveries.

My inspiration for the character was Carl Sagan, because he always had such a sense of appreciation and wonder for the universe, even as a scientist. He was atheist, but had an incredibly spiritual approach to his work.

When I asked Dave if he was fine with with adopting at least the visual persona of Carl Sagan to illustrate and explore the concepts in this card, he said yes! We decided on a white turtle neck and black blazer, to give the “Carl” effect. The next day in Dave’s Facebook feed, someone had just so happened to post an image of Carl Sagan with a spiritual quote that was right in line with our concept… And to make the kismet more potent, in the image he was wearing just the outfit we had discussed! I was delighted when Dave shared it with me.

“Science is not only compatible with spirituality; it is a profound source of spirituality.

“When we recognize our place in an immensity of light-years and in the passage of ages, when we grasp the intricacy, beauty, and subtlety of life, then that soaring feeling, that sense of elation and humility combined, is surely spiritual. So are our emotions in the presence of great art or music or literature, or acts of exemplary selfless courage such as those of Mohandas Gandhi or Martin Luther King, Jr. The notion that science and spirituality are somehow mutually exclusive does a disservice to both.”

This card does not portray a particular Portland landmark (the OMSI would not allow me to take photos because of conflicts between the scientific nature of their location versus the spiritual implications of Tarot… something I found quite amusing as it felt ironically in alignment with one of the key messages of the card), but I did my best to capture the feeling of a planetarium show with elements I had on hand.

In the image, there is an implied audience, perhaps for a show, or maybe a classroom… And the instructor/scientist/spiritual mentor at the forefront holds a holographic image of the Earth before him, to remind us of our responsibility to understand and appreciate our world and our relationship to it. Behind him swirl the mysteries of the universe; while he does not hold ownership to these mysteries, he acts as an entry point into the understanding of them.

It is by interacting with the master’s perspective that we learn to develop our own study, and to pave the way for one day becoming masters ourselves. By seeking the truth outside of ourselves, we grow closer to the realization that truth lives within us.

In a world full of confusing information, it can be helpful to have a guide to point us to a road. In time, we will develop our own compass, thanks to the influences of our various guides and teachers.

As a medical intuitive and a teacher for the well-being of other intuitives, I think Dave stands as a great example for the teacher’s ability to inspire others into the expansion of self and well being through attentiveness to our own natural and energetic processes.

If you are interested in learning more about Dave’s work, check out his recently published book, Self Care for the Self Aware, available through Hay House’s Balboa Press.

Previous Day – The Emperor The Next Day – The Lovers