Starting afresh on a new journey can be an adventure when you maintain your innocence. Just be watch your step! And welcome to Portland, dear wanderer! You’re in the right place.

The Fool card is the beginning of the journey in Tarot, so I wanted the viewer to immediately be welcomed to Portland, and thereby The Portland Tarot, on the very first card.

Cheryl is the lovely subject for this card, and as her last name is Green, green seemed to somehow subconsciously supplant itself as a theme for the imagery. In this card I decided to keep the Fool’s usual carefree pose; with Cheryl’s winning smile, I felt it came off beautifully. Another thing I love about it is that is has a touch of a feeling of “The Sound of Music” about it  that seems oh so fitting for this card. 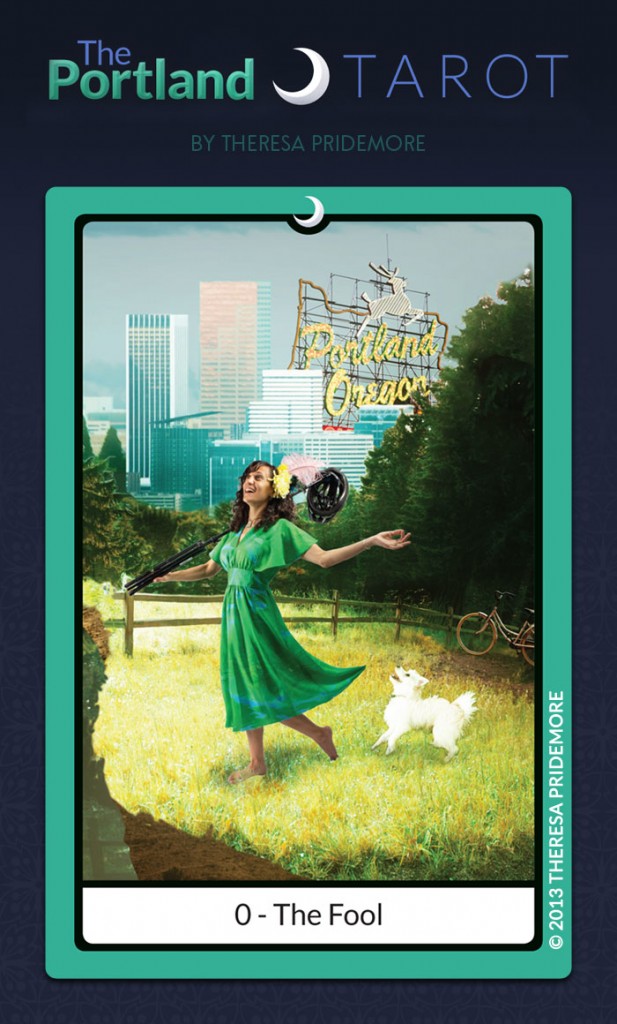 This card traditionally speaks of innocence, light-heartedness, and the free-natured experimentation that comes with youth (and not knowing what you don’t know). You have little fear in taking risks… for better or worse. You might be walking off a cliff, but you wouldn’t see it coming! You’re having too much fun trying new things.

Cheryl and I chose The Fool card because, on several recent occasions, it had made an appearance in her life. We discovered several connections between the card and her story.

Other than her careful consideration of the needs of others, part of what guided her on this particular path was a brain injury she received from a wreck in 2010. In the beginning things were incredibly difficult; after many trials she has found ways to navigate the changes and continue on with a full life—albeit a very different one from the one she had pre-accident.

We talked at length about how this difficult change rendered her innocent once again… Not in the doe-eyed way we often mean when we tell other adults they are innocent, but rather by almost putting a hard reset on some parts of her mind that truly give her a more youthful awareness—at least, where it comes to some things.

For instance, there is knowledge we accumulate as the years pass—things we take for granted—like how, if you touch a hot stove, it will burn. (Or, in her personal version, how you can’t pull cooked spaghetti out of a boiling pot of water with your bare hands and not pay the price.) She told me other stories about how her senses shifted, how her way of focusing and responding to things had changed, and how these changes sometimes affected interpersonal interactions. (When it comes to interacting with people with disabilities, many of us have also played the Fool… bumbling our way into hurtful and presumptive behavior thanks to assumptions and an absorption in our own way of living and being.)

However, her change has led to some other interesting shifts that—at times—can lead to positive opportunities. She says that after her accident, her sense of humor and ability to laugh at things grew tremendously. In fact, I can’t think of a time I’ve hung out with Cheryl that a majority of the time wasn’t spent in raucous laughter. She is also much more amenable to risk-taking, which has had a byproduct of enhancing her creative life. She tries more things out with far less abandon than she can recall doing pre-injury.

The innocence she was left with as a result of her accident presents both challenges and opportunities (but no mistaking, with an emphasis on the challenges). She makes it all work for her, and I see her as a creatively vibrant soul with a big mission in life. And like many of my creative friends, I admire her for taking advantage of the spirit of adventure this city has to offer. I’m delighted that she is there to kick off the deck with her glowing smile and infectious enthusiasm.

One other story about this card… The cute little white dog that appears in the background was photographed at a dog park I found hidden away when going on a photo scavenger hunt. I eyed him from afar—he was just as bouncy as he is in the photo. So I stalked him and his owners until they were in earshot and asked if I could take photos. I’m sad I don’t remember any of their names, but they were all quite lovely and delighted to let me snap away; I was so tickled to get exactly the pose I wanted for the piece.

Next Day – The Magician