You’ve turned a corner into a new land. This is the domain of Death and she beckons to you to embrace change. This change may be painful, perhaps it is difficult to engage in the process of re-invention… Ultimately, though, this change is necessary for you to evolve, to become who you are now meant to be. Fight it and it may well feel like dying… Surrender and you may actually be able to see all the color and joy this change will bring into your world. Ultimately it’s up to you… and whatever story you bring to the change game is really just that—a story. Step out of your old story and into the new you.

Death is never a simple or easy card to get. However, when approaching this card, I wanted to imbue it with a less intense, less dark energy. It’s pretty serious, but Death can be the harbinger for goodness in our lives—at least, in the metaphorical sense, which is in most cases what this card means in readings, in my experience.

I noticed that when people new to Tarot get the Death card in a reading, their mind usually jumps to the worst possible interpretation for the card. I wanted to take a little bit of the edge off of it, and give people an opportunity to really engage with the changes coming into their lives, instead of being terrified to face them because of a deliberately off-putting image. 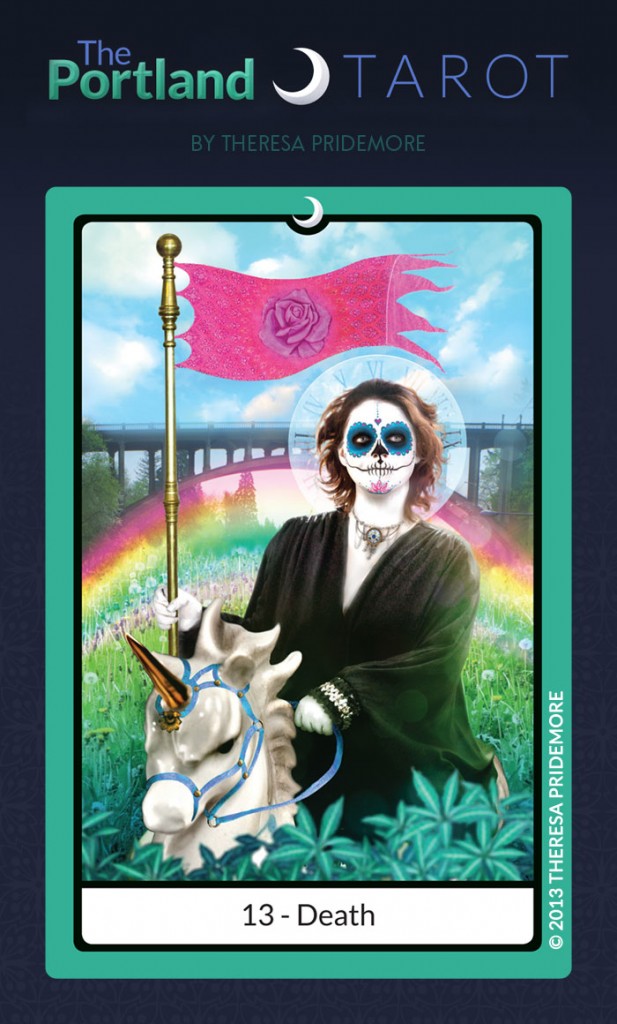 Brooke Redbird is the subject for Death. She assisted me a lot early on in the project as a photo shoot assistant, engaging in the play of the initial stages of an ever-evolving process for this project. I wasn’t sure who I was going to ask to do Death, and I was a little worried I’d have a tough time finding the right person, because who wants to play the role of Death?

When I told her about my deck early on and later asked her if she would want to be in it, she practically threw herself at me to be on this card. I was thrilled! She said she resonated with the Death card for ages and felt like she was always going through big changes and had always been the sort of person to totally embrace positive change, no matter how difficult… And, like me, she sort of relished in the challenge. Yes, this was definitely a person to embrace the positive aspects of Death and help me bring a new vibration to this card!

I had had this idea for awhile to put death on a unicorn, instead of the usual white horse. Specifically a ceramic figure of a unicorn with a person on top. I think it all added up in my mind as a more whimsical image, and had the happy byproduct of feeling more Portland thanks to the presence of a kitschy collectible… Either way, it softened the card and gave it a more playful quality, something I really wanted to do. I had also always intended on adding a rainbow to the image, too, as an icon for hope and renewal after the storm.

When I told her my plan, she was clearly stoked! She told me that she had a thing for unicorns, especially images incorporating rainbows (well, specifically unicorns puking rainbows… which always give me a tickle). Obviously, it was a sign that our collaboration was meant to be, something the actual process proved even more fully.

Midway through our photo shoot she tentatively shared an idea where we could paint her face in Dia de los Muertos candy skull makeup. It was brilliant! At Halloween time people in Portland often paint their faces in this style, so it was not only beautiful and fitting, but it was also honoring the city in a unique way. Even though I had planned to be somewhere a couple hours from the start of our shoot, I postponed and spent the next three hours painting her face with the acrylic paints I had on hand in my studio, then meticulously positioning her and photographing her in different poses.

Brooke had to be completely silent during the shoot because the acrylics would crack if she moved. When I painted the heart on her forehead in the third eye position I felt this little zap of energy… After we were done with the shoot, she told me, “Hey, did you feel a little zap of energy when you were drawing the heart on my forehead?” It was pretty fun that we both felt it, but didn’t actually discuss it when it was happening. I felt it was a little reminder that Death is ultimately a figure of love, inviting us to change, but with compassion and empathy (even if she does seem very serious at first).

She went home afterward and washed her face and was luckily able to keep her eyebrows! Thankfully she assured me that it all washed off with no damage. Truth be told, I was a bit worried.

A little bit more about the imagery… Behind Death is the Vista Bridge, and idea given to me by Sam (one of the subjects in the Lover’s card), because of the bridge’s own sad connections with death by way of suicide. (Something that will hopefully change as the city works to make this bridge more difficult to jump from.) Getting this photo was its own story as I had to go to great lengths to get the right shot, jumping over the median from a busy highway exit and carefully climbing over discarded needles to get to a high enough point to capture the image. Thinking about the somber associations of this bridge, I guess it didn’t surprise me that I would run into the remnants of such activities.

Ultimately, death can be serious business and quite challenging, but it embodies a hope for the future—that is, if approached mindfully, with love, and with acceptance. I love all the creative energy and willingness to experiment that Brooke brought to this card, and how she helped me turn a traditionally dark card into one that people can face with a bit more grace (and, hopefully, a bit of humor, too).