It’s time to stand in your power and create the world you want to live in. Don’t be satisfied with any barrier to your success; you have the power to achieve your visions, your dreams. You might have to be single-minded in your quest, to gather immense resources, to stand tall against many challenges, but if you keep the goal in sight you can get it done. Don’t ask others for permission… If you lead, they will follow. Take charge, trust in your integrity, and you can build—and protect—your own personal empire.

When a friend introduced me to Portland-based model and actor Nick Johnson, I knew he would be the perfect subject for The Emperor. Not only is he kindly in his demeanor and kingly in his presence, but he really connected with and got what I was going for in the spirit of the card. We had a great time collaborating for the photo shoot. Our idea evolved in the studio for the costumery, and before I knew it we were experimenting with more traditional Emperor attire, instead of the modern attire that we had originally planned for. And it really worked. 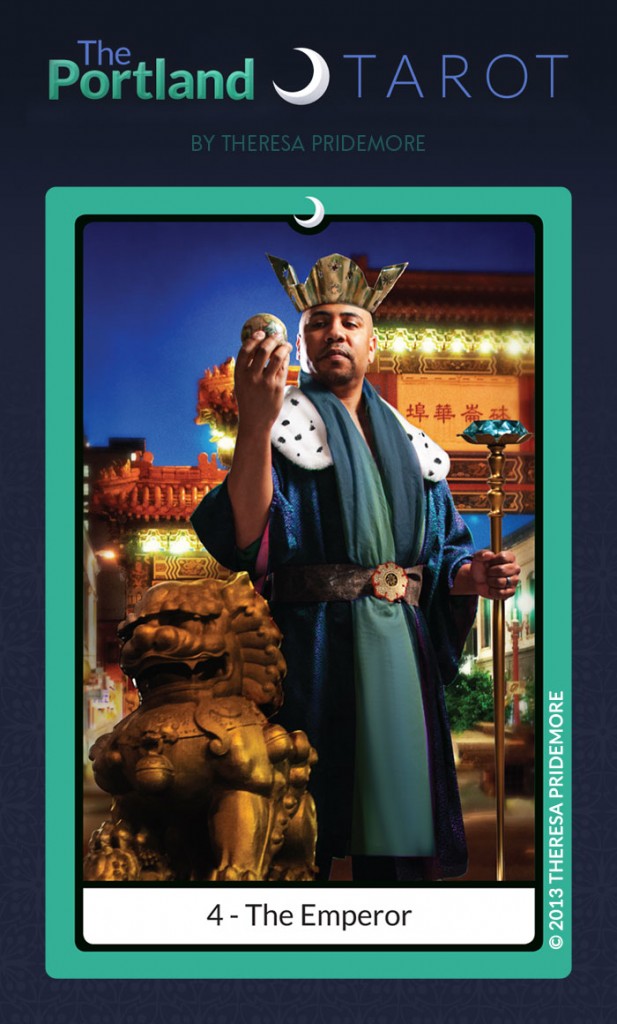 The Emperor can be a trailblazer, one to create the New Way, but he has learn how to use the existing structures to make it happen (or to create his own structures, and convince people to adopt them). It takes a lot of self-determination and self-belief to be the one to say—and fight for—a new system or a new way of doing things. There might be friction on the way, and understanding or learning how to work within the existing systems to accomplish incredible things is the hallmark of a successful Emperor. In this archetype, you have to diverge a bit from regulating the desires of your community… you may actually need to lead them in a direction they aren’t comfortable with, because you can see the bigger picture, and how to get it done.

Nick had some great insights about his participation on this card after the fact that really touched me on a personal level. He was happy that the card showed “a black male in the role of power and inspiration” and felt the image would reach more people and relate to more people than the traditional image of the Emperor in Tarot—this is something that I really wanted, and was glad it came across.

Being an Emperor requires a tremendous amount of integrity to make sure you are really keeping the greater interests in your heart. The noblest expression of the Emperor is a caring leader who can help his subjects stand by his decisions because of proven trustworthiness. When I meditated on the energy of this card within The Portland Tarot, many role models came to mind. As obvious as it might be to center on business figures, I found myself instead picturing individuals who had a greater social mission. Martin Luther King Jr., Elizabeth Warren, John F. Kennedy, The Dalai Llama, Princess Diana, Abraham Lincoln, and Nelson Mandela were names that came to mind. Men and women who knew how to focus on a big vision for a better world, and who were willing to show others — by the power of their own integrity and example — how to fight for it.

Hearing Nick’s take on this (without any prompting from me) was incredibly heartening. Nick felt that the Emperor is a “person that’s established, who’s gotten there… who’s attained all of his goals and conquered all.” He felt that the traditional images of this figure in most other Tarot decks say to Nick and many others, “I can never be this person; he doesn’t look like me.” That the Emperor’s position and achievements are “unattainable.”

But Nick felt that The Portland Tarot version of the card that he stars in says to a wider audience, “Anyone can be that person… Anyone can attain their goals, get to that position of higher being, accomplish anything they want to, and reach that point of accomplishment. It says that anyone can do this.”

While I know from watching the experiences of good friends and loved family that this is not always easy in the face of social challenges, I think that time is giving way to a better and better circumstances for people of all races. But there is no doubt, we do have a long way to go. It’s up to all of us to create an atmosphere of permission for everyone to embrace the Emperor role in their own lives, and in the world at large.

The message Nick gleaned from the final piece is something that I deeply care about on a personal level; as the daughter to an African American stepfather growing up in the south, I had seen and experienced my fair share of racial stereotypes (for me, dealing with the perceptions around living in a mixed-race family, as well as watching my dad become the center of other people’s stereotypes). There is nothing I want more than to be able to raise my own children in a world where people are equal in their opportunities to expand and create their own personal empires, regardless of race or culture.

I was also delighted to later learn that posing for the card was a great affirmation to Nick and his own personal goals, and also very much in sync with his personality. He said, “The Emperor was perfect for me. I do have high standards. I’m on my journey, on my way to that goal. I may not be there yet, but I’m trying to get there.”

I just love how this is represented in the card. His calm, focused gaze on his personal empire is truly felt. I wanted his kingly presence to be accompanied by something equally majestic, which is why a chose a night photo of the gate into Chinatown and the lion dog on the left that, like the Emperor, has his paw on the pulse of the world.

The highest manifestation of this energy is in the leader who can lead from the heart instead of the ego.

He also stands for personal empowerment, a right—not a privilege—owed to all people on this planet. The Emperor in this deck is not the usual conquistador… He is the leader for a new world order, and a voice for a new structure that is truly equal.

Previous Day – The Empress Next Day – House of the Seeker