Press for “The Portland Tarot” Deck

“I absolutely love the artwork in this deck. I am not very traditional when it comes to art, I prefer more lowbrow or pop surrealism, so this deck was right up my alley!” …

“I have to say, I am very impressed with the book that comes with the deck. The info it packs is awesome and different than all the other books. The book is quite large compared to a normal LWB. The first 16 pages are all about the deck, spreads, etc. The rest of the book is about each card and how it reads in a reading, affirmations, etc. The booklet is 64 pages total and consists of information on the last page about how this deck links to the city Portland. LOVE that!”

Local Find PDX, May 7, 2014
“Where Art and Intuition Meet: The Portland Tarot” by Sue Campbell

“If you start asking around for things that are quintessentially Portland — and you ask the right people — you’re bound come come across the Portland Tarot.

“And when you see the images from the deck for the first time, you can’t help but smile and shake your head. The essence of Portland is immediately recognizable.”

In this article, Sue asks Theresa questions about the process of creating the deck, some pleasant surprises since its creation, and Theresa’s views on Tarot readings.

“Jordan: A bridge is a space between… It’s a transition piece. It’s a synapse. Where the neuron jumps across. You’re in a limbo-land. And that’s kind of very Portland, because anything goes in Portland.”

Go to the video on Jordan’s site >

PDX Magazine, November 9, 2013
“Inside The Portland Tarot” by Ross Blanchard

“A practitioner of tarot, Pridemore transcends the stereotypical mystic. She is not Eliot’s Madame Sosostris, described in the Waste Land as having a “wicked pack of cards.” She and her deck are a friendlier, less ominous encounter, welcoming even to the skeptic as a means by which to understand one’s self through the analysis offered by a conversation, spurred by the simple spreading of cards.

“I have a confession. I had looked at the Portland Tarot online a few times and it just didn’t appeal to me. Not knowing the companion book was co-written by one of my Facebook friends, Jamie Morris, I decided not to buy it. But then Jamie asked me if she could send me a deck as a gift. Now having received it and seen it in person, I like the Portland Tarot. Much more than I anticipated! It looked “computer collage” to me, which is a look I’m not into, especially if it’s done poorly. And you don’t usually get a feel for that until the deck is in your hands. But while this deck is still something I would consider computer collage (if that’s even a term…I just mean images layered on top of other images) it’s really well done. Whether it was the mood I was in while viewing them or whatever, now that I have it in my hands, I like it a lot.

“The guide book is very substantial and the description for the Hermit conjured up many thoughts for me, which is always appreciated.”

“Pridemore talks about the Portland Tarot as being dark, but funny (and it is!), modern, yet infused with symbols of the ages (and it is!). Probably my favorite card in the entire deck is Mount St. Helen’s (The Tower). Here we see a very calm looking gentleman, dressed in a white shirt, black vest, and black bow tie, wearing a black bowler (hat) that has been blown off his head. All kinds of symbols come exploding out of his head! Profound, insightful … and incredibly funny! (To me, anyway.)” …

“This deck has character, and spunk, and is clearly well thought out. What a fun deck to work with!”

Oregonian Article, May 24, 2013
“World Tarot Day’s here: Reading about your own life”

“Pridemore … invokes the words of one of her teachers. ‘Don’t give up the seniority in your own life,’ she advises querents, who come with questions about relationships, family matters, education and career paths. ‘The cards can help you see the big picture,’ she says. ‘But at the end of the day, we make our own decisions.'” …

“Theresa Pridemore  is developing her own Portland Tarot deck. Here’s one of her designs and some of her own words: ‘The Strength card in Tarot is not about physical strength. It’s about internal strength … finding balance … displays of compassion … overcoming obstacles.'”

“Theresa Pridemore, an artist and Tarot card reader from Portland, Ore., is taking her own visual, meditative journey into the Tarot to create a deck with modern day concepts and environments, which will feel helpful and relatable to the world of a querent today. She also wants to challenge some misconceptions that Tarot is dark or frightening in nature.”

“On October 6, 2013 artist Theresa Pridemore was my guest on the Psychic Cafe. Theresa’s tarot deck, The Portland Tarot, is a deck like no other. Theresa shared stories about this deck-in-progress and her process as an artist and a tarotist.”

Watch the video on Christiana’s site >

Local Event Announcement for July 5-7, 2013
The Portland Tarot to be at World Domination Summit’s “Portlandia Village”

Theresa Pridemore has been invited to do tarot readings for attendees for this 3,000 person event in the Portlandia Village, where she will also showcase artwork from The Portland Tarot. She will read from the Major Arcana version of the deck.

Read more on the blog >

“I wanted to create a deck that worked with modern ideas, while maintaining a sense of the arcane. Not a new notion, perhaps, but I was excited to put my own take on this direction into the mix. The deck might have Portland origins, but has proven to have a farther-reaching appeal.”

“Although lots of other decks of Tarot cards are available, what Theresa noticed missing and ‘what she craved most was a deck for everyday use — for things like business and career questions or issues around love and friendship in the Internet age.’ So she’s making that deck, card by card. The heart of her shines through in each piece. So does her joy in the process.”

“Death wearing the makeup of a Dia de los muertos sugar skull. The Moon illuminating Multnomah Falls. The Lovers uniting beneath the sanguine gaze of a cherubic pug. Artist Theresa Pridemore is revealing her wholly original Portland Tarot deck at a rate of a card per week, with the aim of completing all 78 cards by the end of next year.” 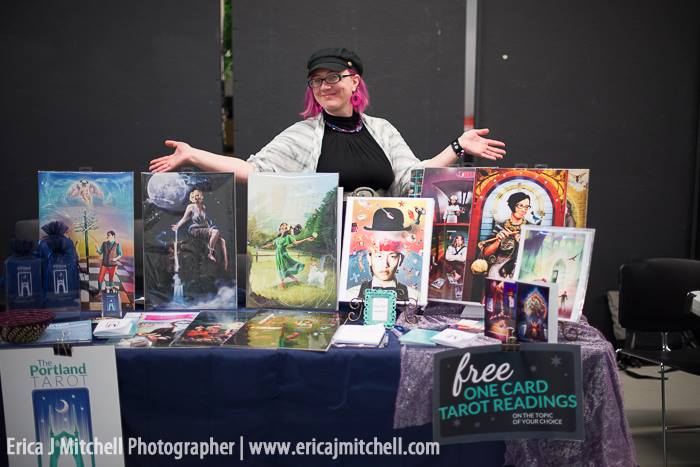