A Great Start to Another Year of Art

The card I last completed was The Seven of Mugs (traditionally Cups). I had a pretty ambitious concept for this one that has been stuck in my head for two years, and it ended up taking about seven cards worth of effort to complete. But, for me, it was worth it. It was the project that launched my year and showed me just how far I could go with my art.

So, the concept. I had always envisioned that this card would depict a guy watching a series of televisions, in which each presented a scene relating to the concept of the cup. The character would be present in each television, living out that particular story. In the foreground he’d be witnessing the options, and in the background he’d be experiencing them.

The concept made me think of a scene played by David Bowie in The Man Who Fell to Earth. The character, Thomas Jerome Newton, sitting in an old gynecological chair, mesmerized by a wall of televisions. 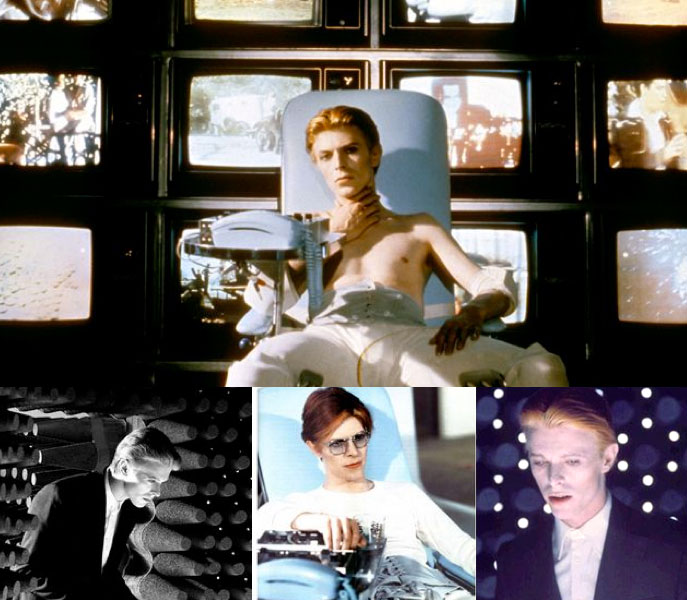 Inspirational Images from “The Man Who Fell to Earth”

Those close to me know what a huge Bowie fan I am. I got a huge kick out of the idea of paying homage to one of my heroes in a card. However, I was clear I wanted it to be an homage, not a direct rip-off of the idea.

I was contemplating who to invite to star in the piece, and when pulling cards on the options I had in mind, it became clear that a particular individual would be a perfect choice. I sent Leo Daedalus, an impresario and performing artist who runs a show called The Late Now, a Facebook message to invite him right before the new year. My husband and I had attended his shows for awhile and loved them. Leo and I met when I was invited to the show a couple of years back to present my 2nd Edition Majors Deck and talk a bit about the project. Since then, Leo and I had gotten to know each other a bit and I sensed he’d get a kick out of being a part of the piece. 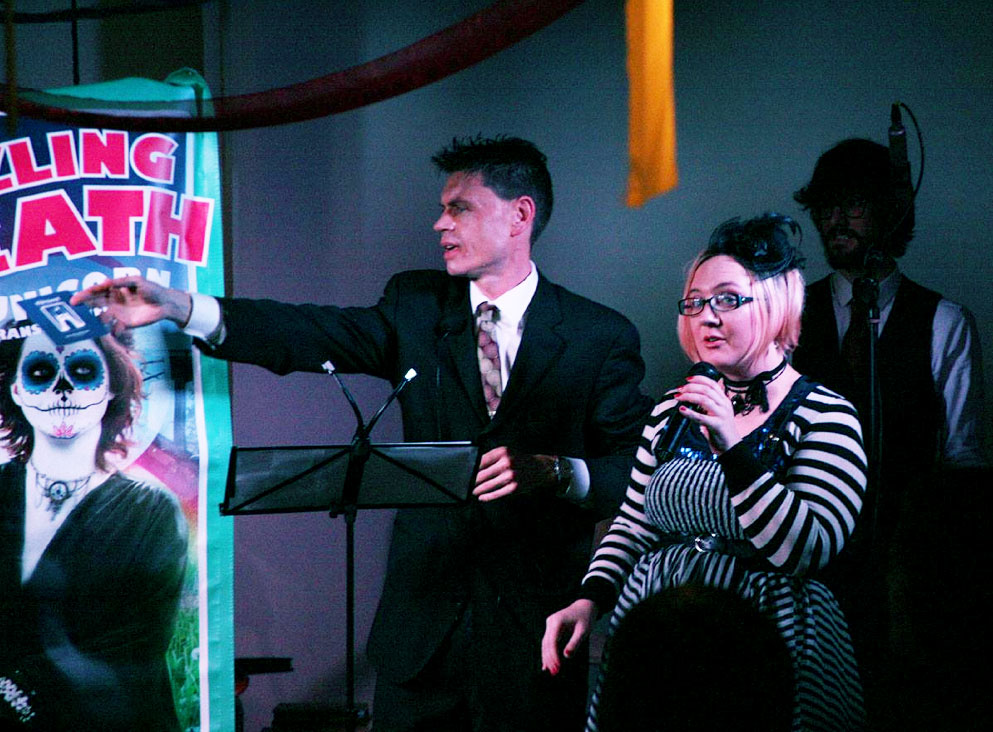 He responded to my message requesting his participation with an emphatic yes. As our conversation unfolded, he told me something really fun. (By now, I am never surprised by these sorts of happenings.) Apparently, he had been thinking obsessively about the movie The Man Who Fell to Earth for the last month, and especially about the scene I described. He had been wondering how to incorporate an homage to this scene into his own creative endeavors.

The Concept & Style Come Together

Well, it was a no-brainer that we were destined to collaborate on this piece, and we began with much enthusiasm.

It was an auspicious beginning that was an indication of the unfolding project to come. Over our brainstorm sessions, he decided to go so far as to dye and cut his hair in a Thomas Jerome Newton style. We picked an outfit he already had, where he looked like TJN in his suited scenes.

Visually, I decided I wanted to go for a style meshing TMWFTE, Bladerunner, and Minority Report (some mood board images below). The week of the shoot I was still pondering how I was going to afford all the costume rentals, and I was spontaneously requested to photograph a model for my gifted illustrator friend Lee Moyer, and that evening he discovered my need and was able to loan me half the costumes I still needed.

If you want to see my mood board for this piece, check out my Pinterest board for the card. You can see the different influences that came together (and ideas I ended up abandoning, for various reasons). 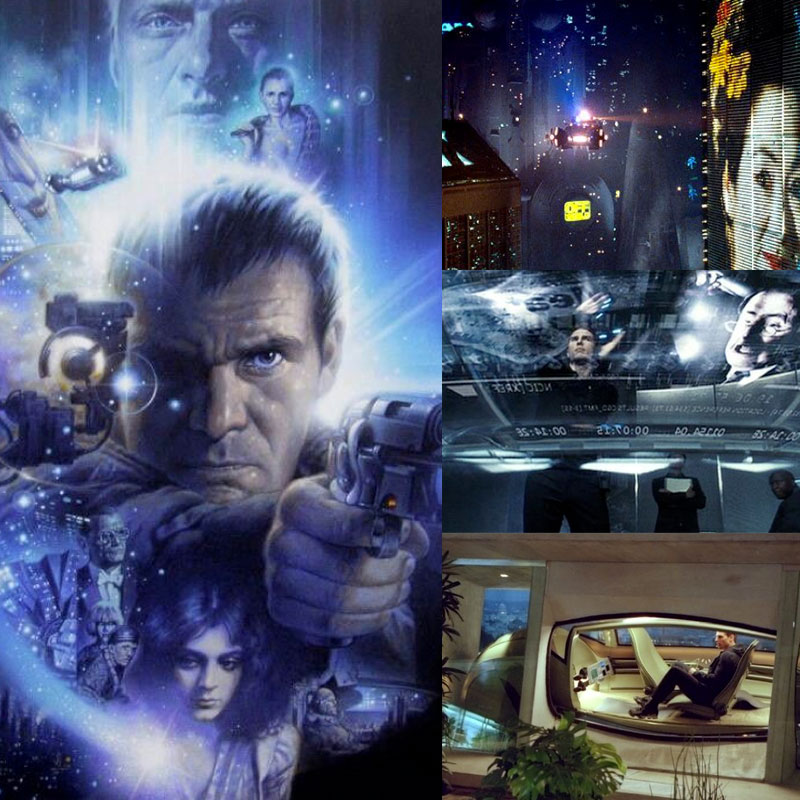 Inspirational Mood Board Images from “Bladerunner” and “Minority Report”

or How I Fell in Love with Portland All Over Again

I forgot to mention, after my first creative meeting with Leo, it became clear to me that I would not be able to take this piece as far as I wanted to without a new camera. I wasn’t getting the pixels I needed to really take my pieces all the way. My old camera had served me really well, but it was starting to show its age. I talked to my husband and we brainstormed a way to afford it… I’m so glad he took a risk on it with me, because it ended up making a huge difference. In fact, I realized that my photography skills were far better than I knew, now that I had the equipment to really take it further. I rented lenses and started getting some really stellar images that blew me away.

I knew I wanted a cyberpunk cityscape in the background, and I was trying to figure out how to get it. I ended up going on a treasure hunt for cool vantage points of the city, especially at night. This ended up being a mind blowing adventure for me. The pictures I got shocked me. And, I will say, as I took the images I felt this amazing kinship with the city itself. I felt connected, zen, in love with life. I had a touch with a kind of duende I’d never before experienced. And it kept going and going the whole month I worked on this piece.

All because I decided to take a risk on a new camera. Whoa.

(Check them out. I was surprised how painterly they were, and how well they evoked the “Bladerunner/Cyberpunk” feeling I had been attempting. All with very little manipulation.)

Three Goofballs Walk into a Studio…

The photo shoots that Leo and his significant other Anna participated in were just as exciting. We all found a wonderful flow in our collaboration that resulted in some really fun imagery. We spent two weekends photographing the various scenes in the image and saved our Bowie day for last. We were even supplied some dilation eye drops from a friend on a hilarious and miraculous coincidence of joking around about wishing we had access to an optometrist’s supply, and my friend just so happening to have them in her medicine kit. (I’m finding joking is the easiest and quickest way to manifest something.) Leo endured a dilated eye for three days in the name of art.

Just some fun outtakes from some of our photo shoots:

I’m really pleased with the outcome of this piece.

I ended up with an image that had a lot of layered meanings, and ways of looking at the art. What you see at any time is a clue into your own state of mind… But here are some concepts and questions I intended in the creation of the image.

The Images and Symbols of The Seven of Mugs

The Man Falling to Earth… Represents the incarnation of the spirit on earth, playing in a virtual reality of life.

Represents the watcher inside us, the one who chooses the incarnation. Is he living in the future? Is he on television himself and being watched by us? Is he a time traveler? Or the alien who lived on even as the human race grew and changed? Does he try to integrate all of the realities he sees into one reality, or does he choose one? How many facets of himself can he honor on this earthly, time-limited plane of existence? And who is he really? Who should he choose to be? His empty cup represents the potential to fill our lives with chosen experiences.

This is just an overview of the story. We had many other fun adventures in the creation of this piece, but these are the highlights. I’ll close out with some cool images from our Bowie shoot, where I think Leo masterfully channeled David Bowie, just as masterfully as he had Indiana Jones and Adam Ant. (Check out some awesome samples below.)

It was a good piece to kick off the year. I put lots of work in to get it just so. And it was a huge leap of faith, because neither I nor anyone else had a clue how I was going to bring it together and make it feel cohesive. But I think it worked out really well, and is one of the best pieces of artwork I’ve created to date. It was completely worth the camera investment and the additional $700 it took to get everything in order for the 8 pieces that we created to make the final piece.

Art isn’t always cheap to create, but totally throwing myself into each piece has been totally worth it.

Here’s a some pics of myself with Leo on stage at The Late Now show where we showcased the final piece (and Leo’s Bowie hair). And a follow up pic after the show with me, Leo, and Anna, celebrating their successful show and all our hard work on the piece. 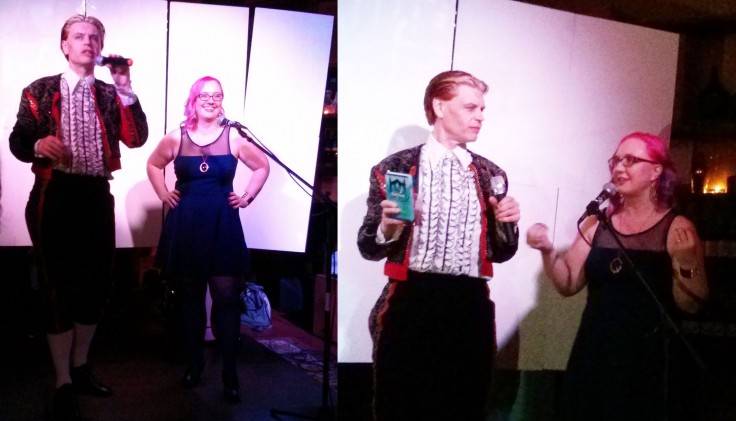 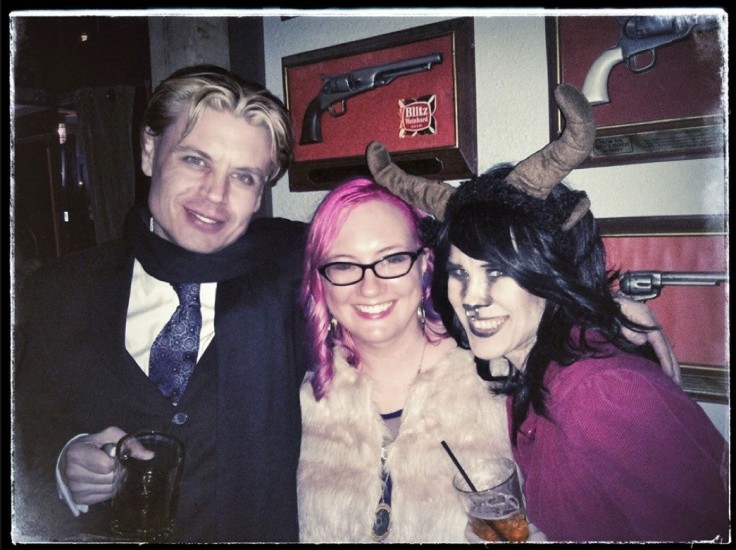 P.S. Tell me what you think about the new piece! And let me know if you’d like to purchase a print. At some point, I will sell prints on the site, but I am always up for requests, in the meantime.

P.P.S. Credit where credit is due… I want to thank Hollywood Vintage, as usual, for being an awesome go to for costumes. Cynthia Lopez of Cynthia Lopez Video for documenting the shoot (to be shared in the future!). Thomas, Alex, and Jenny for helping out with the Socrates shoot. Anna Leander of Anna Paul and the Bearded Lady fame for posing in two images and being awesome creative support over four days of shooting. To Kristenlee Morton of Studio Thirty Salon for an awesome Bowie cut and color. To Jefferson Lee for being my sounding board and second pair of eyes on the artwork, and for supporting me in general artistic and photographic insanity. To Pro Photo Supply for great lenses and reduced weekend rental rates, and David Sarapina for conversation and photo tips. To Portland City Grill for giving me access to an awesome vantage point for taking city night shots. And of course Leo Daedalus of The Late Now for his thorough commitment to the piece, from conceptualization, to costume wrangling, to hair alterations, to eye dilation, to the wearing of Leotards, to itchy beard wearing, to hairspray bombing, and four days of awesome posing and collaboration.