Proof that the Universe does make personal phone calls.

I never knew just how much magic could be packed into a phone call—from a stranger, no less—until Jamie Morris’ Florida number appeared on my cell phone one Saturday evening in June. But that call was packed with enough sparks to prove that sometimes the Universe does respond to ultimatums.

Earlier that day, my beloved women’s circle had gathered. When it was my turn to share, I found myself confessing my feelings about my recent Kickstarter project’s lack of funding. “I received such an amazing outpouring, so much love and support,” I told the group. “And I am truly grateful for that. But the effort bankrupted me, financially, spiritually, and emotionally.

“Despite my hard work and those who helped, I still didn’t meet the mark. So, what are you trying to tell me, Universe? That to be a vibrant artist living her truth I have to be in the poor house? Always struggling?”

My little tantrum was interspersed with playful cursing and laughter, but the truth was, while I had kept a brave face during the Kickstarter campaign—and was truly grateful for the gifts I’d received—it was tough to look that lack of funding in the eye. I’d put my faith on the line in a big way and had had a very bumpy ride, a ride that resulted in much financial struggle in the following months.

Still, I felt lighter after revealing the full truth to the group. After the gathering, I went to visit my friend Cynthia (the person who prompted me to do this project in the first place). And in the middle of our klatsch, my phone rang. It was a call from Florida, and not a number I recognized.

It was Jamie. She had spotted images from The Portland Tarot online and been captured by them. Sleuth-like, she followed the deck’s progress from page to page, finally finding both the underfunded Kickstarter and an interview with me listing my phone number.

She said she waited all of ten seconds before dialing. She just wanted, she said, to let me know that she thought the deck looked awesome and that she wanted to learn more about my plans.

It would have been a delightful call to get at any point, but in that moment, it felt like a thumbs up from the very same Universe I’d just been complaining to. But even at that, I had no idea just what a wallop this woman would bring to my life in the coming couple of days. And I abandoned any skepticism I might have felt because the connection was so instantaneous.

In our first call, I discovered she was funny, brilliant with Tarot, and perfectly aligned with the image I had of the sort of woman who would appreciate my deck (another thumbs up). We had a fine old chat, and she gave me a great reading that really lifted my spirits. When we hung up, I shared my amazement with Cynthia, who agreed it was a wonderful “atta-girl” from the beyond.

And then, two days later, we talked again. Evidently, Jamie had been as encouraged by our chat as I was. She’d been looking for a project to put her creative energy into and kept returning to The Portland Tarot. In fact, the night after we first spoke, the idea for the 23rd card in the Major Arcana, “The Weird” card, dropped into her mind while she was taking a bath!

We did a pinkie swear and got to work. Over the next week, Jamie created the Portland Bridges 3-Card Spreads, acted as a sounding board for the minors suits I’d been stewing on, inspired the circus-themed booth I was assembling for World Domination Summit, and co-wrote the fold-out guide to go with the first edition deck.

“And she’s not charging you?” my friends kept asking.

No. She wasn’t charging me. Jumping in with both feet, she has full-heartedly engaged the risk with me. As a writer, Jamie is talented and dedicated. She’s been working with Tarot for thirty years. And she, too, was seeking a passion project.

Now, she’s become both a playmate and an excellent friend! Who knew you could become so close to someone in just three days, and still love working with them months later? Jamie and I have the same goals, and that makes our collaboration feel effortless. Because she’s deeply connected to this project, she is a constant reminder that the work is worthy. It’s funny how much less daunting things feel when there’s someone in the trenches, working hard at your side.

“Support from the cosmos is never more apparent than in the shape of a friend with heart and widsom.“ – Tweet it!

It’s Jamie’s contribution that inspired me to go forth with a second edition of the majors deck. What she’s bringing to the card interpretations is just too good to keep hidden up The Portland Tarot’s sleeve. Rather than awaiting publication of a full deck, I want this juicy goodness to accompany a version of the majors-only deck. But producing the nearly 70-page booklet we’ve embarked upon? That’s going to take a bit more—ahem—”resources” than our original, single folded instruction sheet. 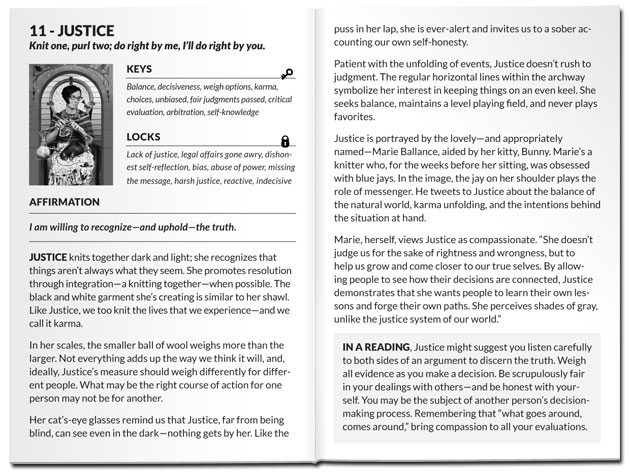 Above: a little taste of what’s to come.

And that’s why Jamie and I say, “Here’s looking at you, Indiegogo!”

“Whether a surprise phone call or whiz-bang Tarot reading, the cosmos sends answers—when we are ready.“ – Tweet it!

We hope The Portland Tarot can become your daily bridge to the divine. 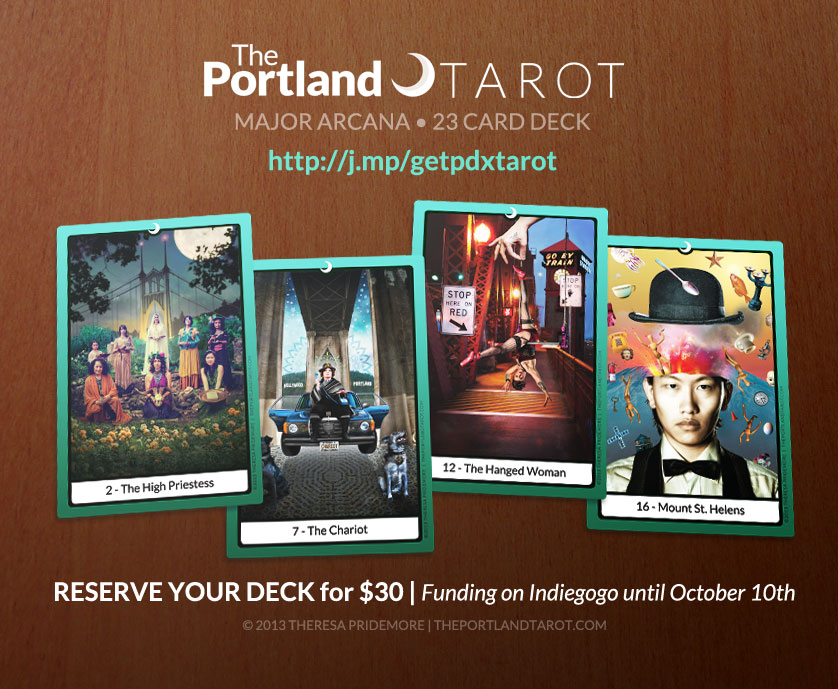 If you’d be interested in adding your voice to the cosmic thumbs up, please consider sharing the following link with your pals: http://igg.me/at/the-portland-tarot-major-arcana-deck/

In the meantime, I wish you all the cosmic “thumbs up”s, “atta-girl/atta-boy”s, and “woohoo”s you can handle.

With a grateful “woohoo!”
Theresa (and Jamie)