This is Not a New Year’s Resolution. (It’s an Artist’s Revolution.)

Posted by Theresa Pridemore on Jan 3, 2015 in Creative Journey | 1 comment

When I started this project, I was gung ho to finish it in record time. I mean, I did most of the work for the Majors in a matter of months. Leapt tall websites in a bound, ran two fundraising campaigns (honestly, much to the chagrin of my bank account as my passion project often took precedence over finding client work). Amazing things happened and everything worked out, even as challenges abounded.

When 2014 rolled around, I was sure I could whip out half of the minors. No prob!

Erm, not so much. But a lot of great things did happen. And some sad things, too. Life wouldn’t be life without ups and downs. And we can find beauty, even in sadness and loss.

Early in the year, Jefferson’s mother passed away. It was a tough time, and having lost my mother when I was in my early 20s, I could empathize with him, and was very sad to lose this lovely woman in our lives. Then, not long after, one of my dearest kitty compatriots, Kiekie, was diagnosed with lymphoma and had to be put to rest. Times were tough. We were both in grief over these losses and doing our best to find the lessons we could take away from it all. They had taught us so much about how to live life fully.

Life soldiered on, as did we, and I guess you could say things took on a sort of seriousness. I felt like I needed to focus some more on working with Jefferson on creating a more stable home and financial life, and that meant really digging in and focusing on my design and web development business. And quite honestly, I am so lucky to have awesome clients to work with, so I don’t mind. It just meant putting art time on the back burner and spending more time in the work-related trenches. It felt right to put something back in the financial and energetic coffers after putting so much energy and so many resources into the creation of the deck the year before. We needed to have a feeling of more careful steering on a well-paved road and less roller coaster ride.

However, The Portland Tarot just seemed to get more and more exciting as time passed, even though I spent far less time on art last year. I worked the first half of the year on developing a new image for the packaging, to get it ready for retail. I also busted my buns to earn the money to pay for a larger print run, which was oddly more relaxing than trying to run a fundraising campaign. I worked with my promotional priestess, Ailey Hines, to get the deck placed in more stores. I saw web sales wane, and store purchases become more frequent toward the end of the year, which I was totally keen to see (though I will take both!) I feel like The Portland Tarot blasted off, and it was exciting to get feedback rolling in from so many quarters, confirming all the hard work we put into making this deck accessible and easy to use for folks with a variety of levels of experience with Tarot.

Well, it wasn’t a year totally without art… I did get to create one piece, at least: I was very excited to get to do a card concept with some wonderful roller derby women, which I will share sometime within the next month. (In case you’re curious, it’s a Portland take on the 5 of Wands, which, in this deck will be 5 of Roses! It just needs some finishing touches.)

However, most of my energy went into very pragmatic, business-oriented things. Frankly, I’d worked so hard on the Majors deck the year before that I really wanted to give it a place in the world, and hopefully pave the way to have an easier ramp up for the full deck in future years. I think we did that quite well, and I can’t wait to see how well the deck continues to be received in stores like Powell’s, New Seasons, and Made in Oregon, not to mention all the awesome boutiques that have taken it on.

(Side note: I had always felt certain that the deck would end up in the “big three” Portland stores above, but it wasn’t until the Arbor Lodge New Seasons actually purchased some decks to sell that it really dawned on me just weird it probably was to expect a Tarot deck to get taken up by a grocery store, even if it is one with a local, liberal bend and incredible gift section. It was at that moment that I realized just how powerful belief in something could be toward swaying reality, because, frankly, that’s some kind of crazy mojo, right? I didn’t do it on my own… I had so much help from incredible friends and advocates who paved the way for this crazy idea to get accepted, and I have no doubt also had a hand in making sure the first batch of decks were sold out at the store within a month. You awesome ones know who you are.) 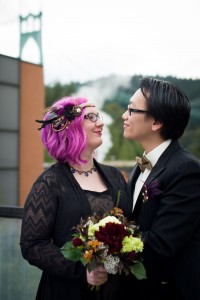 Beyond the deck retail efforts, it was a big year in many other ways, as well. Jefferson and I tied the knot and had a lovely tech-free holiday on the Big Island of Hawaii. Before that we had worked very hard on a huge project, and were excited to be able to celebrate properly with some time off. And we are absolutely delighted to be married to each other. We are living the dream, and ceremony and rings are really just the icing on the cake.

I must divert a moment and get a little sappy on you… Jefferson is the most incredible husband and collaborator, and he really helps me to maintain belief in my work, and gives me so much space to follow my passion. I have had times where I felt doubt in myself and my ability to finish this project, and he’s really helped me regain my self-belief and focus. I feel incredibly lucky that we get to be together, and that we went ahead and made it formal. (And if you are curious to see some of his talents at work, you should check out the game he co-developed titled “Turn of the Card,” which is a story-centric role-playing game using a Tarot deck… How perfect for mystic-loving geeks like me! And how kismet that he had a Tarot-related project going himself, long before we met. Oh yeah, and isn’t the site awesome? He made that, too.)

It was a good year overall, despite the sadness it started out with (and our remorse that Jeff’s mom couldn’t see us be wed).

And, even though there is no real difference between last week and this week, other than an idea of endings and beginnings, we turn our sights to the year ahead.

Growing the audience for the deck will continue to be a serious endeavor this year, but artistic pursuits have once again come to the forefront for me. Which is a relief, because I have found it emotionally difficult to have so little to report on the minors when people have asked. I had expected to be close to wrapping up by now.

I know there will be other creative pursuits, but today I recognized that, at this point in my life, even with my other passions and responsibilities, there is nothing more important I can be creating than this Tarot deck. Why? Well, I honestly don’t feel like I even need to give myself a reason. (This, for me, is progress. I often usually feel like I need to justify my efforts.) The deck matters somehow, most especially to me and to something in me that I need to see realized. It was good to realize that, deep down, despite distractions ranging from unavoidable to wonderful to simply necessary, I am very much committed to completing this deck, even if it takes longer than I anticipated.

In that spirit, I’ve scheduled a number of photo shoots this month for concepts that I feel really clear on and excited about. I’m just delighted by the people who have come on board to pose, and their dedication to collaborate on each concept with me.

This project has taught me so much about the value of a creative community, and how no artist lives in a vacuum. It’s helped me to reprogram ideas I had about what it meant to be an artist, ideas that did not really serve me. It’s helped me to lay claim to my abilities as an intuitive, and to do so in a, “Shrug, yeah, so what I’m intuitive, and?” kind of way. (Because, frankly, we all are intuitive and magic is just a reality of life, nothing that even needs huge fanfare or ceremony… it just is.)

I guess this sounds a bit like a New Year’s Resolution post, but it really isn’t. I have all kinds of things I should probably resolve to do, like cutting sugar, exercising, (writing shorter blog posts,) or being more disciplined with my time, but I’m not even going to go there (though, if I choose to do something healthy later this year, this will be how I do it).

All I have is this burning desire to make crazy images that tap into our intuitive imaginations, with all the wackiness that exists in my brain combined with the power and creative force of the people I know and meet to make it real. And I’m really lucky to have people who care about what I’m creating, and who are quite happy to keep me accountable to my goals! (This is an open invitation to bug me if you feel like I’m not sharing enough progress reports in the coming months.)

I’m looking forward to this year of art, and I have a feeling it will be even easier than the first one I embarked upon a couple of years ago. And, at the end of it all (well, maybe not this year, but possibly the next), I will actually be able to say, “I created a full-on Tarot deck.”

Then I will drop the mic and back away. Assuming I’m holding a mic at the time, that is.

Instead of making a resolution, create an artistic revolution. @PortlandTarot  <– Tweet this