Making a Tarot Deck: One Artist’s Quest for the Elusive Passion Project

There is something that I learned from doing Tarot readings for the last few years: just about everyone is seeking a passion project.  Something so profoundly interesting to them — nay, haunting, grabbing, possessing — that they will stay with it even if it drags them through hell.

Here’s something I’ve learned the hard way: finding a passion project — or being found by a passion project — is only the first part of the equation. Staying fixed on this seemingly elusive conquest can be an excuse to avoid the even greater difficulty of keeping a project sustained.

Creative endeavors are always fraught with difficulty and it’s only through beautiful friction and confusion that true art is born. The temptation to give up can be strong if we don’t deeply care about what we’re making or haven’t yet learned to follow the inevitable ebb and flow of the creative journey.

I looked for my own passion project for a long time, but in the end it actually found me. It’s called The Portland Tarot, a Tarot deck capturing ancient concepts through the illustration of Portland, Oregon landmarks, people and ideas. It all started as a design for a local Tarot art show and grew into an ambitious endeavor to create seventy-eight original pieces of art, each imbued with their own symbols and meaning. I officially launched the project in October of 2012, but recently pushed out a bigger campaign to get the resources needed to make it real.

After uncovering this fulfilling venture and spending some time in its euphoric throes, I began to wonder how I got here in the first place. Like many I’ve known, I had been actively seeking the elusive beast called the “passion project” and had spent much time pondering the perfect formula for my own artistic bliss (but far too little time experiencing it).

When I look back, I think finding the way to my own thrilling endeavor started with discovering a divine combo of a variety of interests. I’m always looking for more opportunities to get to know Portland and I love exploring its spiritual side through my photography. I also relish in a good Tarot reading and can spend many blissful hours with a Wacom tablet and MacBook Pro to entertain me. Put it all together and I am satisfied artistically, spiritually and socially.

The other key to my keeping engaged and motivated was making the decision to work within my strengths. I have many creative interests, but I’ve always had a special knack for composing digital collages with Photoshop. In the beginning I was mentally overwhelmed by the effort it would take to collect a photo library for my composite images. Now I see the process as an excellent opportunity to explore the city and its people through my lens.

So, can I truly say the project “hit me out of the blue”? Looking at it critically, it was more of a snowball building in my periphery, becoming an avalanche I could no longer ignore. Pivotal to the project’s development was my openness and my willingness to take little steps to explore possibilities, instead of psyching myself out with the size of my chosen task. (Another thing I’ve learned is that big projects can sometimes be silent saboteurs. If it’s “too big to start now” it’s probably an excuse to keep your gear in neutral.)

Aside from the pragmatic concerns of unearthing my niche, there was a more esoteric discovery that helped me tremendously. Like the genius Elizabeth Gilbert mentions in her TED talk, I’ve found that remaining open to outside forces of inspiration took off some of the pressure of “coming up” with things and instead let things “come through”. Over time I realized that ideas had an infinite array of sources including models, friends, strangers, wrong turns, half-asleep visions and internet memes. I’m starting to feel like my main job is to stay open, keep working and remember to have fun.

Noticing the good fortune and funny synchronicities that support my journey has also kept me positively-framed and success-oriented. Seemingly magical occurrences have given my project a sense of mojo that helps keep me fueled.

Does that mean everything is always sunshine and roses? Hell no. I’ve had to commit and recommit in the face of criticism, failure and frustration. My once idealized notion of the ever-elusive passion project seems in retrospect to have also served as a shield to my ego. Committing to make something of value ensures our resolve and self-belief will be tested over and over again and it’s incredibly intimidating to tackle this crucible head-on.

The hero’s journey (and the artist is a hero) isn’t something we decide to go on one time and we’re done. We will hit many forks in the road. Each time the road splits, one path leads back home and the other through dense brambles. We hope our destination is behind the thorns, but we can’t guess how far off it is, or what exactly will await us when we arrive.

That’s art for you. Deciding to stay with the quest is an ongoing process. Going home is an illusion. Every time I didn’t go into the brambles, I always ended up right back at the same fork in the road a few months later.

Recalling the mojo I’ve felt in the past has been key to continuing through the thorny times. While my project has mostly received appreciation, it has also been subject to varying levels of criticism.  At those times I recall a bit of (paraphrased) advice from (I believe) Seth Godin: only respond to the critique of those who are in the arena with you, making and sweating out the creative journey, too. The rest aren’t worth your time.

Where am I on my passion project? Twelve cards in and sixty-six to go. I feel more intensely than ever that my passion will sustain me, but this project has its own life and I can’t predict the roads I will travel. One thing I do sense is that learning to enjoy the ride, with all its unexpected twists and turns, is another key ingredient to creative success.

You can follow along with me as I create The Portland Tarot, as I’ll be sharing each completed card, the story of its unfolding, and updates about the project as a whole. Watch a video about The Portland Tarot project (and it’s crazy mojo) on the Kickstarter page.

In the meantime… I wish you the creative momentum of a project with mojo, one that contains the divine crossover of your own interests and strengths. If you’re struggling to know where to begin, my advice is to start with the first fun thing and see where it leads.

You never know, you might just have a creative avalanche in the making. 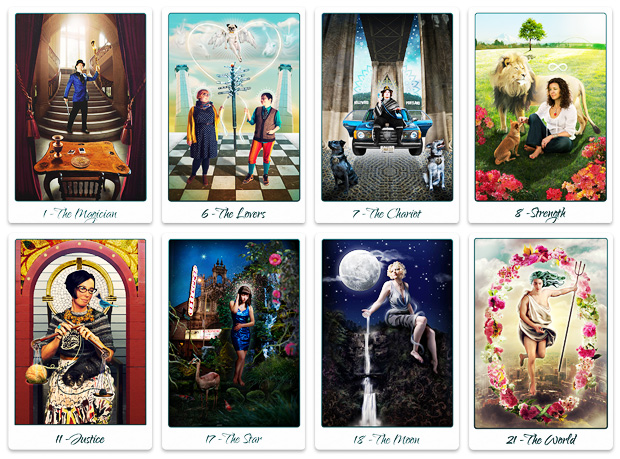